It’s been a crazy year of natural disasters on the news.  From the floods in Texas, to the hurricanes hitting Florida and Puerto Rico, to the wildfires still raging in California, it’s been quite a feat witnessing and covering all of these as a journalist.

Being from California, I’m used to covering wildfires.  But less than 2 weeks into my job here in Florida, Hurricane Irma hit and we were in wall-to-wall coverage.  I’m not going to lie… I was a little freaked out in the beginning.  Here’s a clip I posted on Facebook when Irma’s outer bands were hitting the station the hardest. You can actually hear my coworker say “Welcome to Florida” at the end of it.

But once we got going, the coverage reminded me a lot on what I already knew what to do with fires.  Although hurricanes are very different, as a journalist there are quite a few similarities in covering all types of extreme weather.

Lastly, as we head into the holidays, I wanted to take a moment to thank our first responders.  We work with police and fire agencies hand-in-hand on these stories to get the coverage out.  I worked at KCOY/KEYT in Santa Barbara and it’s been rough here watching the Thomas Fire coverage for weeks on end destroy one of my favorite places, in what has become the largest wildfire in California history.   Sharing this recent post from them as a thank you to firefighters out there for sacrificing their holidays to keep us safe.

As we go into #Christmas weekend, there is no greater gift than to know our community is safe from a devastating fire. Thanks to the tireless work of thousands of men and women who valiantly battled the #ThomasFire, many people will be home for Christmas. We thank our brave firefighters, law enforcement and resiliency of all of our communities affected by the fire. Have a very merry #Christmas. 📷: Stewart Palley, U.S. Forest Service @stuartpalley

It’s been a while since I wrote in here.  Life gets so busy sometimes and sometimes a tweet is a little easier than a post.  I just recently made some website updates since I know life will get busier with the holidays.

Part of the reason I’ve been so busy… I’ve changed coastlines!  I’ve accepted an opportunity to be a executive producer at the CBS affiliate in West Palm Beach, FL.  I really wanted my next step to follow my goal of getting into newsroom management and honestly, I couldn’t feel more thrilled.  I’m learning so much on the job and even in these two months, I know I’m a better journalist than when I first walked through those doors. 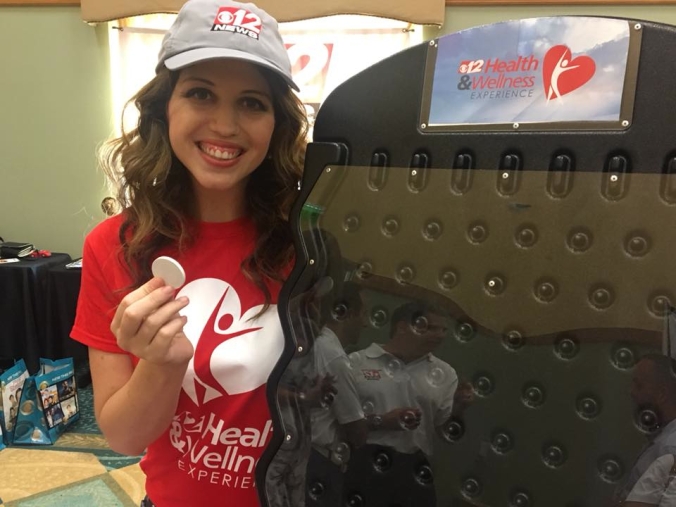 Volunteering at CBS12’s Health & Wellness Experience in Port St. Lucie. I got to relive my game show host dream! 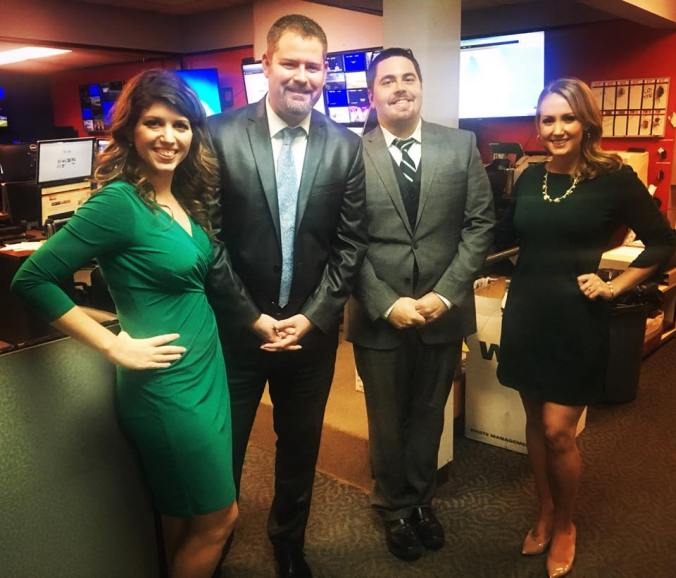 Look good, win better! First day of sweeps and my team is ready.

I’ve already had quite the adventure already.  When I moved here, about a week later I first learned about Hurricane Irma and then I got to live through that, which will be the topic of my next blog post.

Nevertheless, thank you for following along my journey!

Hope you’re having a great week so far!  I just got back from my first Europe trip to Greece and can’t wait to blog about that.

But first… updating my site a bit and adding my new headshot.  It was long overdue!  (P.S. Yes, I dyed my hair and am officially a brunette.  But I’m having fun with this new change 🙂 ) 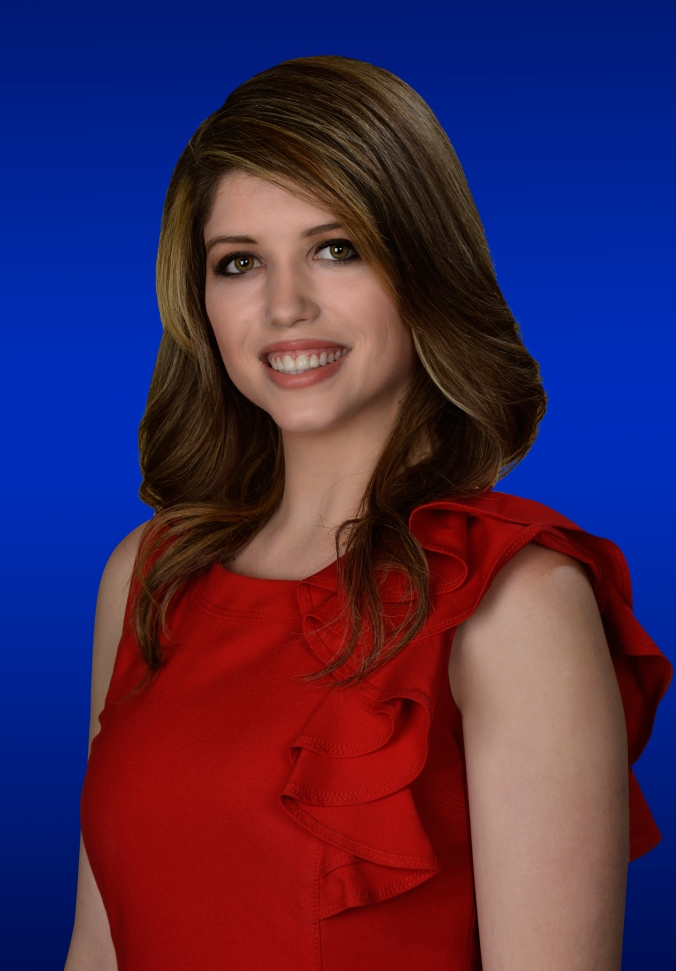 Being healthy is not as simple as just drinking a green smoothie or working out as much as you can to sweat it out.  While those things are marketed as part of a healthy lifestyle, it’s important to recognize that being a healthy person is something that comes from within as well.

So often we immerse ourselves in our busy lives without really taking the time to take care of ourselves. We wake up, work, maybe fit in a workout, eat, sleep…then it’s like rinse and repeat. I know I’m guilty of this… and I think it’s something everyone can relate to at some level.

I’ve done a lot of soul searching in the past year and really have thought about this question more recently.  So… how does one become healthy from within? I’ve narrowed it down to these five main points which I hope can help you too.

Writing this article was actually very therapeutic for me and I’m going to remember this going into the week. What do you do to stay healthy?  Share in the comments below. 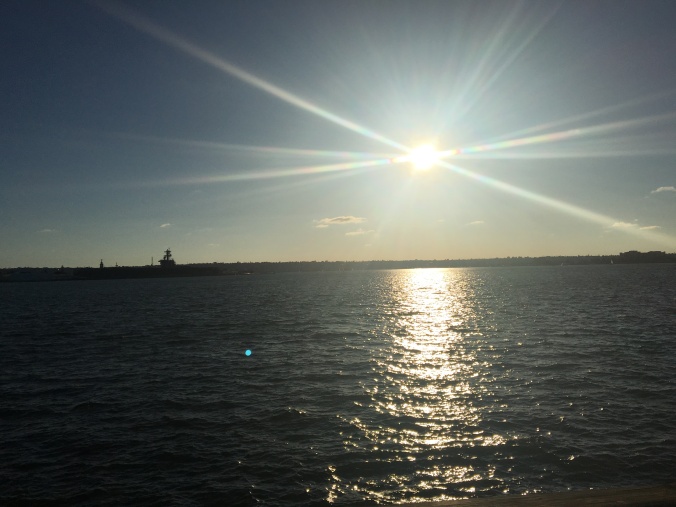 Sometimes taking a moment from your busy day to stop and think can be the best medicine.  This photo is taken from one of my favorite reflection spots at Broadway Pier near San Diego’s Embarcadero.

If you follow me on social media, you know I’m a big fan of barre workouts.

I get a lot of people asking me “what is barre?”  Barre combines movements from ballet, pilates and yoga for a low-intensity workout that produces BIG results.  Studios offer workouts in a group setting that often include movements at the barre, on mats, and using props like resistance bands and fitness balls.  And the music makes it all fun too!

My main studio that I go to is The Dailey Method San Diego.  I’ve been going there for about 1.5 years and I LOVE it.  They offer a variety of different class types for all different levels and BONUS for moms – childcare with some of the classes!  The teachers are all very knowledgeable, especially our studio owner Ashley who is so passionate about her TDM community.  I prefer The Dailey Method over other barre studios I’ve tried because the program really focuses on alignment and making sure you get the moves right.  It’s also the first time I’ve found a workout that not only I enjoy, but also I’m motivated to stay consistent with it.  I very much love being part of the TDM community and I hope if I ever move somewhere else there will always be a TDM closeby! 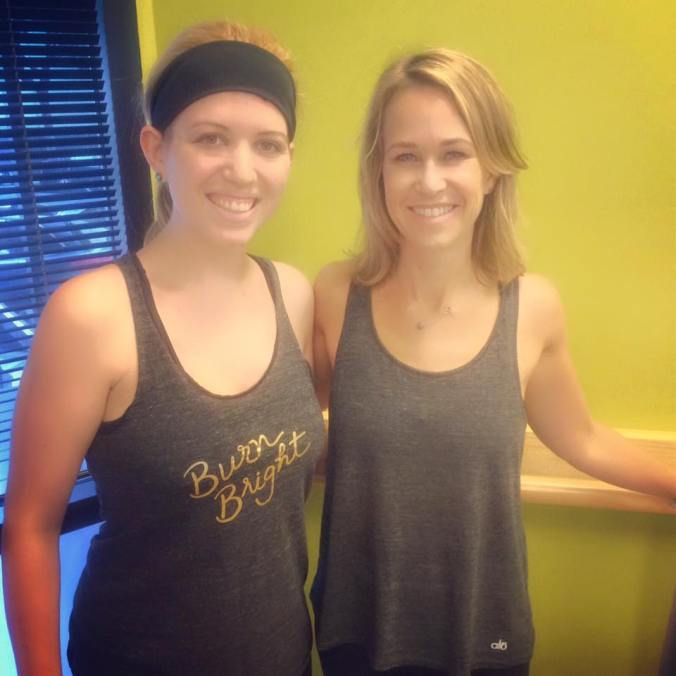 Me with TDM founder Jill Dailey when she visited and taught a class at our San Diego studios last fall.

This month, TDM is hosting a great national challenge going on called The #AlignAndShine Challenge. The goal is to motivate students to go at least 4 times a week  for 4 weeks and there is also an additional optional challenge to eat clean too.  I’ve got a trip to Greece in a month and want to look good in bikini photos…so I’M IN!!!   Plus, I like the idea of #AlignAndShine for the month of May and I’m making that my goal – both personally and professionally.

What motivates you to workout?  Let’s motivate each other to #AlignAndShine!

Looking for a TV news job in San Diego?  KUSI is looking to fill a lot of positions right now.  Here are the main positions we’re looking for:

Interested?  Send your resume to our HR Director Sally Luck at sluck@kusi.com.  If you have questions on any of these openings, let me know.  Good luck!

Unfortunately, I got a terrible cold last week.  It started Wednesday night…I felt so tired and exhausted at work.  I just assumed it was work stress, but the next morning, I woke up with a sore throat.  That day, I had three shows to produce and by the end of it, let’s just say I was a sneezing sick mess. (Plus…you know it’s bad when all three of your anchors are begging you to call out sick the next day!)

True, there are a lot of cold products out there, but when I can, I try to heal myself the natural way.  I’m a big fan of soup and I recently had a black bean soup sample at Trader Joe’s that was out of this world.  I decided to alter it with some cold-fighting ingredients and it actually turned out very delicious. 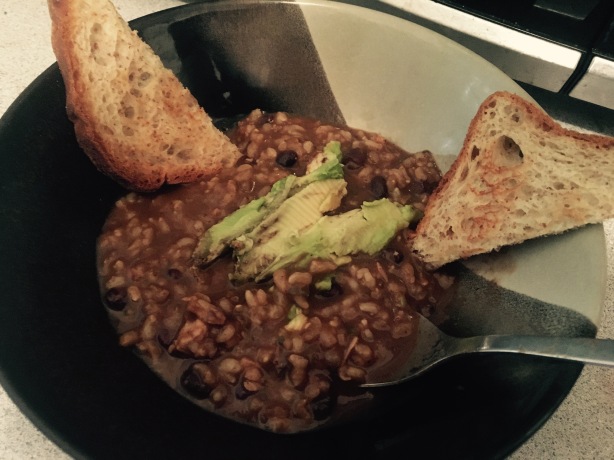 So the big cold-fighting ingredients that are in there are ginger and cinnamon.  Ginger is a natural antiviral which helps fight against illness and bacteria that causes a cold. Cinnamon acts as an antiseptic that can kill the cold virus and soothe sore throats (Source: Home Remedies for Life)

Another natural remedy I found while internet searching is honey and cinnamon. By taking a tbsp. of honey with 1/4 tsp. of cinnamon, it can be preventative, and also helpful if you have a cough.

Of course, natural remedies don’t always do the trick right away, but I’d much rather at least try them then load myself up on regular medications.  And the key to really getting better is giving your body a lot of rest and TLC. (And let’s be honest… most of the time, we don’t give it that!)

What are some of your remedies for fighting a cold?

One of the first things people ask when I tell them I’m a TV news producer is “Boy, that sounds like you do a lot!  Is it stressful?”  And the short answer is – yes!  It’s a stressful job that requires your full attention because you are juggling so many elements.  Some days coming home from work, I find myself completely drained.

One thing that helps bring balance into my life is yoga (I also love my barre workouts too… but that will be discussed in another upcoming post!).  Yoga is great for the mind, body  and spirit and is considered one of the most enduring forms of exercise in this age of workout fads (WebMD has a great article on this HERE).  Plus, it’s a workout that almost anyone can do.

For me, I don’t like to use yoga as my only workout because I like to do more cardio-based workouts that will help me shed the pounds.  But, what I do enjoy about yoga is the way it makes my body feel and I try to incorporate it in my routine AT LEAST once a week. I’m lucky in the sense that my barre studio now offers yoga, but I have recently gotten into restorative yoga.  That yoga is a lot more relaxed and the last hour is solely focused on moving your blocks/accessories around in different positions that you rest on that can improve your posture.  I feel AMAZING after a workout like this and I totally recommend it to anyone that is looking for an “escape.” (And let’s face it – isn’t everyone?)  It actually feels as good as a massage to me… with the added benefit of working out my core!

Plus, yoga can be pretty inexpensive too.  Groupon offers a lot of great deals in the San Diego area.  If you are interested in trying out a class but don’t want to pay the full price, many studios offer community classes that are donation-based.  Usually, they are taught by instructors-in-training, but you still get an awesome workout.  Most of the time, I see the suggested donations for these places are around $5-$8.

What is your favorite form of yoga practice?   Have any places you recommend in the San Diego area? 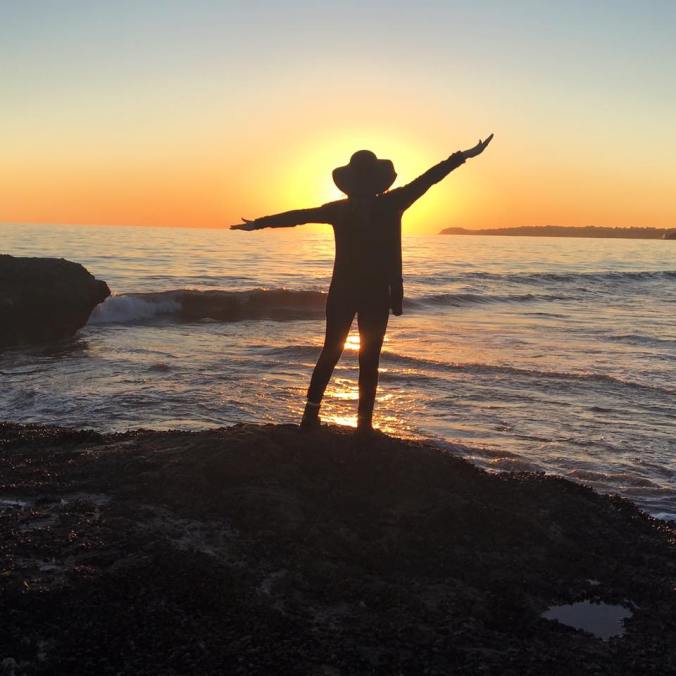 Me getting my beach “warrior two” pose on in Malibu.  How can you NOT enjoy that sunset?

Welcome to my new website. I made it a New Years Resolution to make a new website… my last one was kind of old and outdated.  New year, new change!

Here I will be making posts about projects I’m working on…the inner workings of being in a newsroom, living in San Diego, and some topics I’m interested in.  One of my own personal goals is to travel more, so you’ll be seeing posts about that too.  I’m pretty excited because I’ve always wanted to start a blog and I figured “why not?” when I made this website.

Thanks for following!  Looking forward to connecting with some of you! 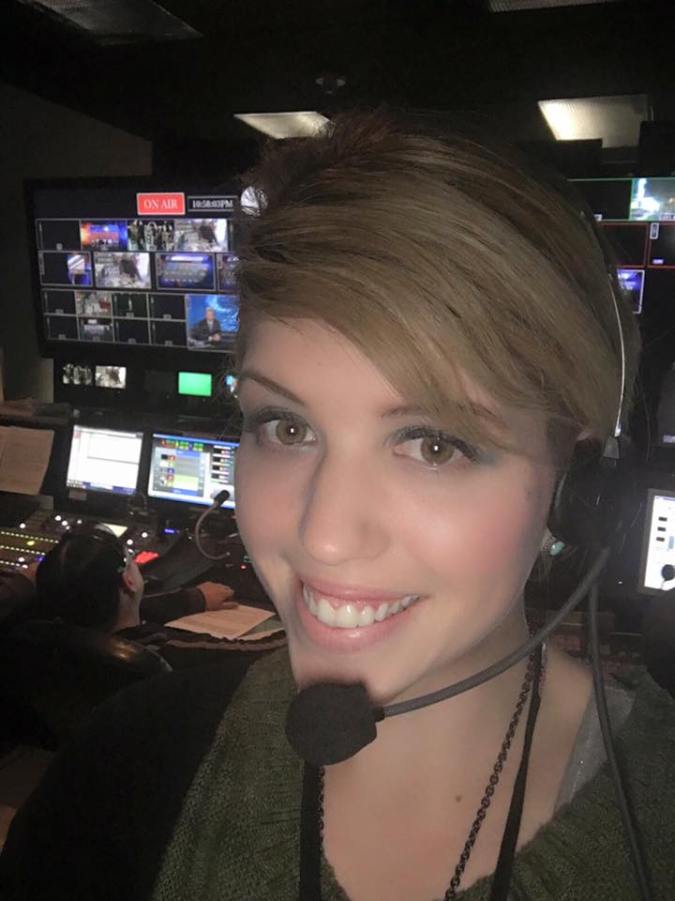 Me in my “happy place”….producing in the booth at KUSI!